Skip Navigation
Home About the Firm The Tradition of Service

A Tradition of Service 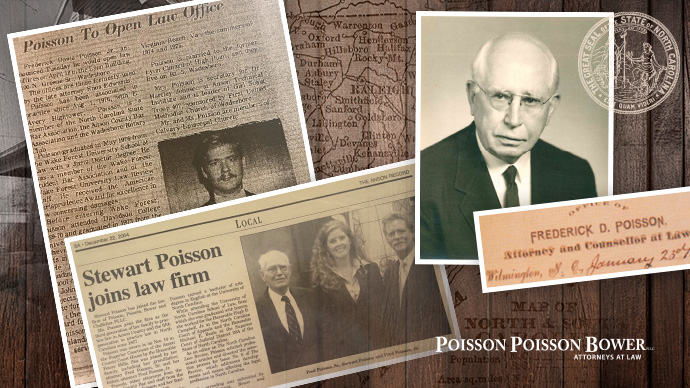 A Tradition of Professionalism

Louis Julien Poisson, preeminent and distinguished member of the Bar since 1910, died at his home in Wilmington, N.C., on November 8, 1961, following a lengthy illness.

Mr. Poisson served as Special Assistant to the Attorney General of the United States in 1912-13. He was a member of the North Carolina General Assembly in 1923-24.

Mr. Poisson was active in many community and civic organizations. He was an officer of the Kiwanis Club, the Y.M.C.A., the Community Chest, and the Board of Trustees of the Wilmington Public Library. He also served on the Boards of the Cape Fear Club, the Cape Fear Country Club, the Carolina Yacht Club, the Surf Club, and the Wilmington Chamber of Commerce. He served as Chairman of Civil Defense for New Hanover County during World War II. During his college days, he was a member of Sigma Nu Fraternity.

Through the Davis branch of his family, Mr. Poisson’s law firm affiliation dates back to the days of his great uncle, George Davis, Attorney General of the Confederacy. At the time of his passing, he was the senior member of the law firm of Poisson, Marshall, Barnhill and Williams, and had practiced in years past with such leaders of the bar – now deceased – as Thomas W. Davis, Judge George Rountree, James O. Carr, and Williams B. Campbell.

He was outstanding both as a legal scholar and as an advocate. For many years, his firm served as division counsel for the Atlantic Coast Line Railroad, and he was Vice-President and General Counsel for Tidewater Power Company before its merger with Carolina Power and Light Company.

Mr. Poisson practiced according to the highest ethical standards, and he leaves an outstanding example for others to follow.

Many members of the Bar throughout Southeastern North Carolina recall with deep gratitude how he so often helped them in the early years of their practice by referring work to them or by associating them with him on various matters. They also recalled how willing he was to give them sound advice when they needed it.

Among his primary interests were: the improvement of educational standards for admission to the Bar, continuing educational programs for practicing attorneys, and rigid enforcement of the Canons of Ethics. He continued to be a student of the law throughout his professional career, and he was never too busy to help younger members of the Bar in their quest for knowledge of the law and its practiced application.

His ever-present willingness to devote his time and talent to the improvement of the Bar and the fostering of its highest ideals will forever remain a monument to his life as a lawyer and an American.

Mr. Poisson is survived by two sons, Louis J. Poisson Jr. of Wilmington, also a member of the Bar, and Frederick D. Poisson of Greensboro, and a daughter, Mrs. Gethyn Poisson Lloyd of Hartford, Connecticut.

Louis Poisson’s great-great-grandfather was also named Louis Julien Poisson and was physician to King Louis XVI. He left France during the French Revolution for Santo Domingo. He lived there with his family until the uprising there and then fled to Augusta, Georgia, briefly before settling in Wilmington, North Carolina, in the early 1800s.

Frederick Davis Poisson Sr. was State Bar Councilor for Anson, Richmond, Stanly, and Union counties (District 20) for three terms from 1997 to 2005. Frederick Davis Poisson Jr. was elected State Bar Councilor for the same district (later District 20A when Union County was removed) and served three terms from 2006 to 2014. Elizabeth “Stewart” Poisson, Fred Jr.’s daughter, has been appointed to the Ethics Committee of the State Bar four times as an ad hoc member. Stewart has also served as the Chair of the Workers’ Rights Committee of the North Carolina Advocates for Justice. Frederick Davis Poisson III, Fred Jr.’s son, has served as the Chair of the Consumer Protection Committee for two years. Stewart served on the North Carolina Advocates for Justice Board of Governors from 2012 to 2017, and Davis served from 2016 to 2018.

Louis Julien Poisson, Jr. follows in his grandfather’s footsteps. He graduates from the University of North Carolina School of Law.

Louis Julien Poisson, Jr. serves as Special Assistant to the Attorney General of the United States.

Frederick Davis Poisson, Sr. graduates with an MBA from the Wharton School of Business at the University of Pennsylvania.

Frederick Davis Poisson, Sr. graduates from the University of North Carolina at Chapel Hill School of Law, having decided at age 40 to leave the business world and continue the legal legacy set forth by his forebearers.

Frederick Davis Poisson, Jr. graduates from the Wake Forest School of Law and moves to Wadesboro, North Carolina to begin the practice of law with established attorney E. Avery Hightower.

Frederick Davis Poisson, Jr. opens his own law firm and begins practicing as a solo practitioner. He handles all types of cases from domestic to criminal defense to personal injury to adoptions. He works as a private murder prosecutor and also defends several clients accused of murder at trial. He eventually decides to focus his practice on representing the injured, narrowing his practice to personal injury, wrongful death, and workers’ compensation cases. His wife, Lynn, works as his secretary.

Catherine T. Wyatt joins Poissons as a paralegal and ultimately becomes a non-attorney advocate in Social Security Disability cases, helping hundreds if not thousands of disabled individuals throughout North Carolina.

George C. Bower, Jr. joins the Poissons in the practice of law, and the law firm of Poisson, Poisson & Bower is formed.

Frederick Davis Poisson, Jr. is certified as a Specialist in Workers’ Compensation Law by the North Carolina State Bar. He is subsequently recertified in 2007, 2012, and 2017.

Stewart Poisson graduates from the University of North Carolina School of Law with honors and joins her father and grandfather to practice law in Wadesboro. She becomes the first woman to join the family’s lawyer ranks.

Frederick Davis Poisson, Jr. succeeds his father and serves as the next State Bar Councilor for his local district in Wadesboro.

Stewart Poisson is certified as a Specialist in Workers’ Compensation Law by the North Carolina State Bar. She is subsequently recertified in 2014 and 2019.

Frederick Davis Poisson, Sr. passes away at his home in Wadesboro, North Carolina.

Stewart Poisson becomes the Chair of the New Lawyer’s Division of the North Carolina Advocates for Justice.

Stewart Poisson is elected to the Board of Governors for the North Carolina Advocates for Justice to serve a three-year term.

Stewart Poisson becomes the Chair of the Workers’ Rights Section of the North Carolina Advocates for Justice.

Davis Poisson, III becomes the Chair of the Consumer Protection Section of the North Carolina Advocates for Justice.

Davis Poisson, III is elected to serve as State Bar Councilor for his local district in Wadesboro, following in his father and grandfather’s footsteps.

Stewart Poisson is elected to the North Carolina Advocates for Justice’s Board of Governors for a second term.

The Poisson family of attorneys continues the long tradition of service and advocacy in the legal community. 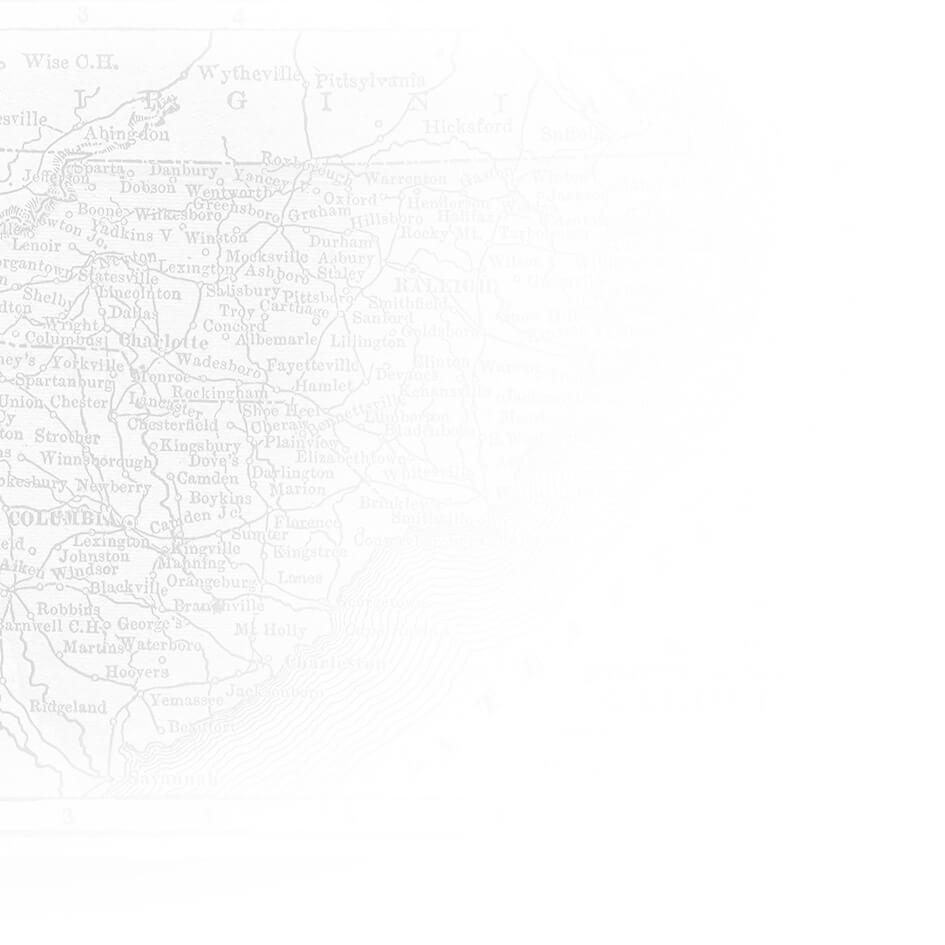